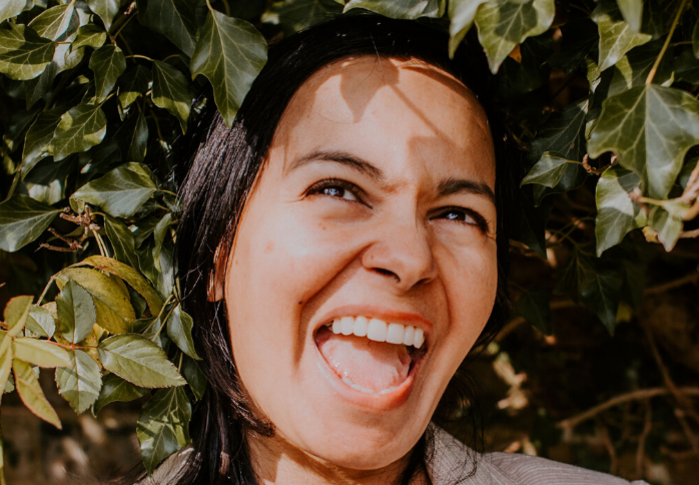 Posted on 31st July 2020 at 15:30
In the winter of 2015, I felt totally overwhelmed. In the space of exactly one week, my son suffered a concussion on a school trip, a young and close family member suddenly passed away and, after years of working in science, I was told my job was going to be made redundant. On top of this, I was living as a single mother with my two young children (one with regular medical needs) in temporary accommodation in Sussex. After I put my children to bed, I sought to find a way to manage my overwhelming emotions.
I continued to search the internet and came across clips of very young babies gurgling and chortling. Suddenly, my whole body began to relax as I began to smile and laugh with them. I replayed the video clip. And then I played more similar videos. It was astonishing to me how much better I felt for laughing. My mental tension melted and I felt less stressed and so much more relaxed. It was a magical moment.
I started to look into the research on laughter. There was decades of it along with hundreds of studies showing its wide-ranging health benefits. I learned that simulated laughter can be just as good for your wellbeing as the real thing – one study found that incorporating simulated laughter into an exercise program helped improve older adults’ mental health.
Faking your laughter helps just as much because the body responds as if it’s real, giving you all the physiological and psychological benefits of laughter. The mind will take cues from the body and it triggers the brain to think it’s happier, creating more deep breathing and the release of happy chemicals (endorphins) in the brain. More often than not, genuine laughter emerges. Even smiling has been proved to create positive changes in the body. It all made so much sense – I was hooked.
As the research showed 15 minutes of laughter was needed for the health benefits, I sought ways to lengthen my laughter. During times of anxiety, I forced a smile. On one occasion, I could not smile, but I found getting up and walking around the room helped. Moving helped me raise a smile and my laughter emerged and I felt mentally and emotionally better. Once I began to laugh more and more, the laughter came easier and easier. Even thinking about laughing improved my mood. I knew that if laughter could have this impact on me, then it could on others.

My laughter fact-finding mission led me to the true story of Norman Cousins. Around age 50, Cousins was diagnosed with a connective tissue disease and a condition known as Ankylosing spondylitis. Doctors gave him a few months to live.
Soon after, Cousins discovered that he felt less pain and fewer symptoms while he was enjoying something that made him laugh. So, he prescribed himself regular doses of laughter, brought on by watching comedy. He later claimed that ten minutes of belly-rippling laughter would give him two hours of pain-free sleep, when nothing else, not even morphine, could help him.
As a result, Cousins lived for another 25 years after his diagnosis. Cousins and others began to study the medical effects of laughter. This is how I discovered laughter yoga. Dr Madan Kataria, a medical doctor from Mumbai, is the founder of the Laughter Yoga movement, which started in 1995. He started with just five people in a public park in Mumbai, and now there are more than 6,000 laughter yoga clubs in over 60 countries. Dr Kataria’s wife is a yoga teacher, and the inclusion of the breathing exercises led to the use of the word ‘yoga’. I felt I needed to proactively put laughter yoga in front of more people who could really benefit from it.
Laughter yoga clubs are becoming more popular, but are more readily found in the larger cities in the UK. So, I trained to become a laughter yoga facilitator. It is said that laughter is more contagious than a cough or sneeze. I found laughing with others easy and infectious. I supported people, of all ages and from all walks of life, to prolong their laughter. I facilitated laughter sessions with people with dementia, disabilities, teenagers with autism, seniors, school children and in workplaces. I’ve even held a laughter session in an operating theatre with 11 theatre nurses.
Laughter is a language that we all speak and it binds us together. Laughter opens the heart – we feel more connected to the people we are laughing with. And people have shared powerful stories associated with their laughter experiences during my sessions. In one, a man told me that, aged 14, a group of older girls at school had laughed at his laugh and told him it was awful.
Since that moment, he laughed quietly behind his hands but now, 36 years later, he felt he could embrace his laugh fully. It was a powerful moment to watch and he glowed as he roared with laughter. I facilitated a laughter session with a group of seniors and a petite, serene-looking lady raised her hand and said: ‘My father slapped me when I laughed out loud as a young girl.’ She vowed to laugh as much as possible as an adult and she continued to do so with her children, grandchildren and great-grandchildren.
One lady, who’d had a mastectomy eight days earlier, came to a group laughter session. She said she had heard about the power of laughter and wanted to give it a go. Afterwards, she told us she felt better emotionally and physically. Another lady had spent three years grieving after a family bereavement but, after laughing with me, said she felt she could laugh without feeling guilty and felt the best she had in three years. All are humbling experiences and reinforce that I made the right choice to do this. But perhaps none more so than when a man with dementia, who’d lost the power of speech, was overjoyed he could make laughter sounds. After the class, he took 30 minutes to write out five words to me… ‘Thank you for my laugh.’
Daily laughter is a choice I have made. When I laugh, I feel fully present and it’s a fun meditation in motion. Laughter has supported me during difficult times, enhanced personal and work relationships and supported my physical and emotional health. It’s led to me to a successful career. I support workplaces, communities and charities through my work. And, surprisingly, even more health benefits of laughing daily have emerged for me.
Aged 48, I have tons of energy and as laughter stimulates facial muscles, I enjoy free, natural anti-ageing. Life continues to have its ups and downs but, for me, laughter is an important daily form of support. Just as I finish writing this article, my son, wearing headphones, watches a video clip and is overcome with a huge belly laugh. I laugh along, while he remains blissfully unaware. The magic and power of laughter found me in a big way and has completely changed my life. And, now, I have the best job in the world.
Share this post: